Steps to becoming a responsible consumer 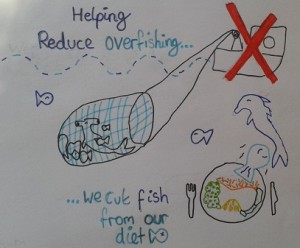 One of the Global Goals for Sustainable Development that we have been focussing this year is Goal 12: Responsible Consumption. A report in 1987 defined sustainable development as, “development that meets the needs of the present without compromising the ability of future generations to meet their own needs.” The problem is that in many areas of the world humans are exceeding the needs of the present and this is leading to problems.

In order to achieve Goal 12 and ensure sustainable consumption and production patterns, the UN states agreed to halve the amount of global food waste per person, by individuals and companies. Recently the issue of the amount of food waste produced by larger supermarkets has become the target for many campaigns. This happens at both ends of the production line: vegetables are discarded because they don’t conform to size and shape regulations and large amounts of food (fresh and packaged) are dumped at the end of the day. This food is often still edible and could be donated to food banks. It’s shocking that there is so much waste in some parts of the world when other parts of the world are struggling to find food.

In America the issue was highlighted by Rob Greenfield, who spent a year travelling across the country, living out of dumpsters, which contained perfectly good food that had been ‘dumped’. He actually put on weight! He would pull out all the edible food that had been discarded by shops and companies at the end of the day and display it for the public to see. It shocked people.

Since the issue of food waste has been highlighted some shops around the world are tackling the amount of food that is wasted and passing it on to food banks but there is still a lot more work that needs to be done.

On a personal level, we can also become more aware of the amount of food that we waste. It’s easy to fill up the supermarket trolley with food for the week ahead but find that a few days later something sits at the bottom of the fridge uneaten, past its best.

It isn’t easy to lead a sustainable life and it does involve some effort but it doesn’t have to take over your life. We’ve made small attempts to adapt our lifestyle to become more responsible global citizens. They do not involve radical changes but help us to contribute to the Global Goal for Responsible Consumption:

Avoid wasting water. Simple tasks such as turning off the taps and only using what you need all demonstrate a more responsible attitude, particularly when some parts of the world have little water and have to work hard to get it.

Buy less plastic. This isn’t always easy because so much of what we buy in the shops is packaged in plastic but if there is an alternative in glass or tin think about buying it instead – these materials are more easy to recycle. If there isn’t, question if you really need it and refuse to buy it. If enough people stop buying products in plastic the companies making them will have to consider alternative packaging.

Refill water bottles. Refuse to buy single-use plastic bottles and refill a bottle with tap water (which is more highly regulated than bottled water). Only about 20% of the single-use plastic bottles that are bought each year get recycled. Those that do get recycled actually get down-cycled and those that don’t often end up in landfill sites or in our rivers and oceans.

Cut down or cut out meat from your diet. The documentary film Cowspiracy highlights how bad for the climate, rearing animals is. The amount of water needed and food grown to feed the animals reared for human consumption is staggering and is having a major impact on climate change. Cows produce methane and are one of the largest contributors of greenhouse gases.

Cut down or cut out fish from your diet. A recent statistic said that by 2050 there will be more plastic in our oceans than fish! Plastic doesn’t biodegrade and almost every piece of plastic ever made still exists somewhere…and a lot of it ends up in our waterways and oceans. The plastic breaks down into smaller and smaller pieces and often get mistaken as food by fish and seabirds. Another reason for not eating fish is the issue of over-fishing. Human greed has led to large numbers of fish being depleted.

Reduce the amount of energy that you use. Only use what you need. Switch electrical items off, turn the heating down and consider changing your provider to a greener alternative that supports green energy.