Being a Plastic Clever Adventurer is SO important

Adventurers (or anyone outdoorsy really) often wear a lot of clothing made from man-made fibres like nylon and polyester. There are reasons for using these materials (hard wearing, waterproof) but there are also some downsides to using plastic-based materials … microfibres! Around 1,000 and 2,000 microfibres on average get washed out of a fleece or base layer EVERY TIME they are washed. And because these fibres are so tiny, they go directly into our waterways, rivers and finally our oceans.

Here is the criteria for meeting the Plastic Clever Adventurer status:

Those looking to commit more to reducing their microfibre impact could:

And to help incentivise you beyond just doing the clever thing because it’s the right thing, we will even help save you money. You see, we have arranged some exclusive Plastic Clever discount codes that will entitle them to buying reduced-rate refillable bottles, coffee cups and straws (+ more). 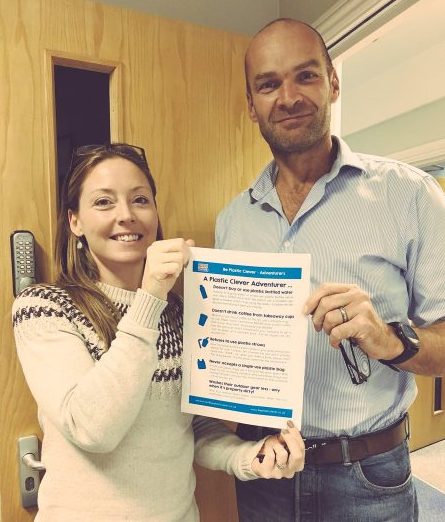 Monty Halls is a TV presenter, marine biologist, speaker, naturalist and travel writer (whew, what a list!). He’s presented multiple documentaries around the globe, and has lead teams into some of the most remote places on the Earth (the most notable of which was leading a multi-national team to the discovery of a sunken city off the Indian coast in 2002). He is best known for his series ‘Great Escapes’, where he lived on the western coast of Scotland and Ireland with his dog.

We’re honoured that Monty and his wife Tamsyn have become Plastic Clever adventurers!

Think you qualify for the Plastic Clever status? Get in touch below, and we’ll send you a window sticker confirming your status!