Plastic: The amazing invention that has changed the world 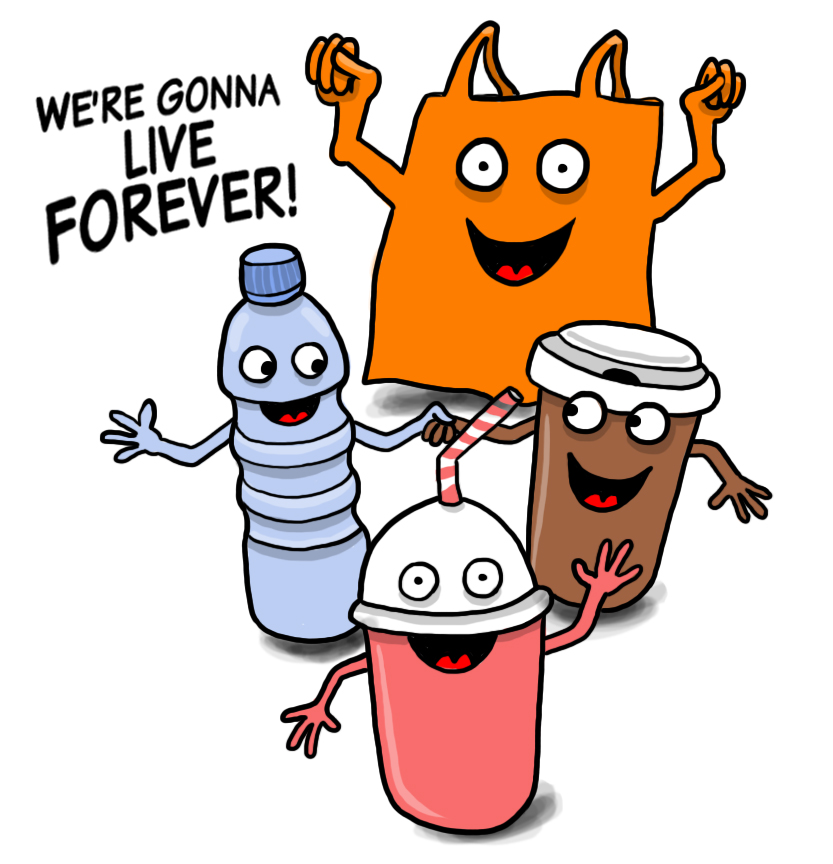 Plastic never bio-degrades – and that’s a (the) problem

Plastic is amazing. Drink bottles, buckets, bags and cutlery – you name it, plastic is everywhere. It’s strong, durable and takes ages to break down. But whilst that’s great in some ways, that’s also a problem. When it somehow manages to escape from our rubbish bins and into the streets, countryside and, more worryingly, the ocean, it remains in the same form for years and years and years. And even when it does eventually break down, it’s always there, either in toxin form or as micro-plastics (tiny pieces of plastic that are more dangerous than they may sound). Especially when it ends up in the sea – sadly, it is considered the world’s largest rubbish dump by some.

The amount of plastic floating around in the ocean is not small. In fact, it’s estimated that 8 million tons of plastic makes its way into the sea every year. Every year. Add that to the estimated 5.25 trillion pieces of plastic in the ocean already, and you get quite a big total. This is floating around in what are called gyres – huge currents in five of the world’s oceans that all that plastic gets caught in, creating giant islands of plastic. And, as you can imagine, this effects the environment hugely. It’s estimated that around 1 million sea-birds and 100,000 mammals die every year from either eating plastic in the sea or being choked or damaged by it. Fish are a different matter. There aren’t many documented incidents of fish dying from eating plastic but the toxins they absorb from it, such as the flame retardants we soak our furniture in, slowly make their way up the food chain – to us.

Consequently, this is not just having an effect on the creatures of the sea. When humans consume fish or any other marine animal, it’s likely that some of these toxins are entering our bodies. They have been proven to cause cancer and mimic women’s hormones. They are deadly. Ocean advocate and skipper Emily Penn is devoted to stamping out this problem. Her and her all-female crew had their blood tested for toxins and out of the 35 deadly chemicals tested for, 29 were found. But humans caused all this. We’re inflicting this damage upon ourselves and the environment. So it’s up to us to fix it.

This problem is finally getting noticed by more then marine conservationists. Barack Obama recently banned the use of microbeads, any particle smaller than 5mm, in cosmetic products. It’s shocking to think that many products that we use in day to life contain microplastics so when you rub shampoo in your hair, you’re practically rubbing tiny pieces of plastic onto your skin. A study revealed that around 8 trillion microbeads enter the world’s marine habitats daily. That’s enough to cover 300 tennis courts. This is the reason why it’s so good that President Obama had banned the use of it in the US. It’s a big step in the right direction.

Also, The newly signed Global Goals, created by the United Nations, cover ‘Life Below Water‘ in which a target is to “prevent and significantly reduce marine pollution of all kinds”.

But here’s how you can help:

Project idea: Clean up a beach and make an artistic statement

A couple of years ago we wanted to make an artistic statement to demonstrate just how much plastic can be found on what superficially looks like a clean beach (a popular tourist beach). We had an idea to collect some plastic off the beach and make a model of The Monster of the Sea – a visual metaphor for the monster that is plastic.

Here’s what we did:

It was great fun making the sculpture and we were happy that we had to try to do our bit to clean up some plastic from a beach and make a statement which might lead to others reflecting on their relationship with plastic products and how they use and  dispose of them.

All these things may sound like hardly anything, but just doing your bit can help reduce plastic pollution massively. Because, as the Global Goals say, “Individually we are only a drop. Together we are an ocean.”