As climate change continues to loom over our heads, the negativity and sadness surrounding it can seem overwhelming. But it isn’t all doom and gloom. There are many individuals, groups and couples campaigning for a better world in ways that are inspiring.

Sustainability campaigner, Tammie Stevens and husband, Jason Lewis, a well-known adventurer, plan to tour the UK coast next April in ‘Moksha’, a 30-year-old Pedalo boat. Why, you ask? It’s all in the name of climate change! Alongside a GB30 film crew, they will pedal around the country to locate green projects and profile individuals tackling climate change in unique ways. The global discourse on climate change can often be very overwhelming, therefore the exceptional voyage aims to demonstrate that regional solutions can be just as meaningful when it comes to creating a more sustainable future.

The eco couple have already completed a pedalo trial run for the upcoming trip, safely navigating the canals of Oxford to Reading, before heading down to the Bristol channel and pedalling along the South Wales coast earlier this August. During the trip, the duo recorded several interviews with people tackling climate change, such as Dave Kennard, the founder of NARC, the UK’s first underwater clean up organisation, four series of short stories which will be later released on Youtube. The eco-friendly team NARC (Neptune’s Army of Rubbish Cleaners) now makes a huge difference, by retrieving lost equipment and rescuing marine life. It is individuals such as Dave Kennard who Lewis and Stevens believe can inspire others to take action in their communities.

Tammie and Jason aren’t the only ones who strive for a better planet. Avid paddle boarder, Cal Major, uses her love for paddle boarding and the ocean to inspire people to do more. She frequently sets off on various expeditions, all with differing motives. In 2016 Cal completed a 300 mile trip around Cornwall to encourage people to refill their bottles instead of buying single use plastic bottles. However, one of her best accomplishments is setting off from Lands End and ending up in John o’Groats, where she paddled the length of the UK, 1000 miles and she made history whilst doing it. Cal asks that you get involved in any way possible, whether that’s joining one of your local Surfers Against sewage plastic free coastlines Campaign or joining the Paddle Against Plastic Facebook group, a place where you can become a part of the community and help raise awareness. https://paddleagainstplastic.com/get-involved/

It’s unimaginable how strenuous these missions must be for these individuals. It must take a toll on their physical and mental health but their commitment to finishing them must be so rewarding, but also shows how important the planet is… Our planet goes through much worse and it’s not getting any better.

But their actions are helping raise awareness in an effort to educate and inspire people to be kinder to our planet. One person’s actions can alter the opinion of another and create a ripple effect, changing the opinions of many.

Another lover of the ocean, Emily Stevenson, created Beach Guardian, a community interest company that aims to engage, educate and empower against plastic pollution. Emily has organised over 200 clean up events with over 6000 volunteers. Her work proves that people want to be educated and are willing to change their opinions and help the planet. Beach Guardian also travels all over the UK, visiting schools to help children learn about the damaging effect that plastic has on the environment. 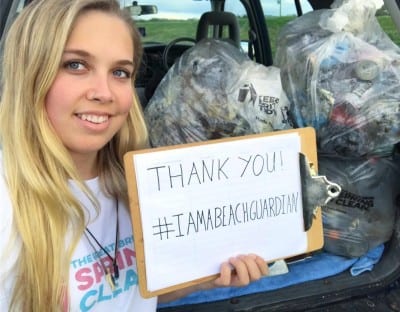 But you don’t have to complete something as extravagant as paddling across the UK. Even sharing posts on social media that raise awareness is a great way of educating others, or joining in on a beach clean up. Those small steps are going to be the ones that encourage others to help the planet too.